Fibertex Nonwovens is participating in one of the world's largest bridge projects: Formtex® to ensure long lifetime of concrete in aggressive environment in Kuwait

1,500,000 m2 of the Controlled Permeability Formwork (CPF Liner) Formtex® is to ensure high quality and long durability of the concrete used for one of the world's largest bridge projects. The Danish company Fibertex Nonwovens A/S from Aalborg is the supplier of the product for the 36 km Sheikh Jaber Al-Ahmad Al-Sabah Causeway in Kuwait.

Fibertex Nonwovens has been chosen as the supplier of Formtex® for one of the largest bridge projects in the world. The 36 km long concrete bridge is being constructed across the bay between Kuwait City and the Subiyah region. The bridge connects Kuwait City and the new Madinat al-Hareer (Silk City), a USD 100 billion urban development project which, among other things, will accommodate the 1,001-metre tall Burj Mubarak al Kabir and the international Bubiyan seaport. Silk City is expected to play a key role in connecting the Middle East and Asia.

The project comprises onshore facilities, a 27 km causeway as well as a beautiful elevated bridge with a 200 m wide and 23 m tall passage – a total of 36 km. When finished, the bridge will reduce the distance between Kuwait City and the Subiyah region from 104 to 36 km, thus reducing the transport time from 90 to 30 minutes. The bridge is one of the biggest and most challenging transport and infrastructure projects in Kuwait and will be a monument to the late emir.

Service life challenged by very aggressive environment
Salt water, high temperatures and increased CO2 levels in the air accelerate the breakdown of the concrete structures significantly. Innovative solutions are therefore needed to ensure that the reinforced concrete has a service life of more than 120 years, as requested by the project owner.

The project is carried out as a Design-Build-Operate (DBO) project, where the contractor must pay the maintenance costs for a part of the operating period. Therefore, there has been special focus on finding a solution that is financially sustainable throughout the entire lifetime of the bridge.

"We're very pleased that some of the world's leading contractors and advisers have chosen Formtex® due to the high quality, flexibility and mouldability of the Formtex® CPF Liner. This means that the concrete achieves the best durability, while at the same time minimising maintenance," says Michael Møller, Product Manager at Fibertex Nonwovens.

Fibertex Nonwovens is supplying a total of 1,500,000 m2 Formtex® for use in the casting of both bridge pillars and bridge spans. Formtex® is used for the casting of the actual concrete elements. The Formtex® CPF Liner drains water from the structures and thereby reduces the water/cement (w/c) ratio of the concrete. The result is a smooth and even surface of the concrete elements without blowholes. This ensures a strong concrete surface that is able to withstand impacts from sand and salt water.
It is not the first time that Formtex® is chosen for a major international construction project, but it is, however, by far the largest project for the present.

Consultancy and training services were crucial
"We've spent a lot of time in Kuwait consulting, testing and not least training the contractor in the application of Formtex® in practice. Documented results and the high service level have proved that Formtex® is the best solution in direct competition with other solutions and other suppliers," says Mikael Møller. He emphasises that Fibertex Nonwovens qualified Formtex® for a construction project as large as the bridge in Kuwait on the basis of numerous reference projects and solid documentation.

"Without a doubt Formtex® was chosen for the project because it proved its ability to ensures prime concrete quality in the various laboratory tests carried out prior to construction. In addition, Fibertex Nonwovens is known to supply products of high and uniform quality which we can document in an efficient quality assurance system," says Mikael Møller.

The Danish company has worked for more than a decade to be qualified for the project which is now a reality. Following fierce competition with other two candidates, Fibertex Nonwovens won the assignment and the giant order of 1,500,000 m2 Formtex®.

Caption:
A. Formtex® is easy to shape and install and is therefore suitable for the round shape of the concrete elements.
B. The 60 m long and 25 m wide bridge spans are stored and left to set in the desert before being transported to the bay.
C. Visualisation of the finished 36 km long Sheikh Jaber Al-Ahmad Al-Sabah bridge. 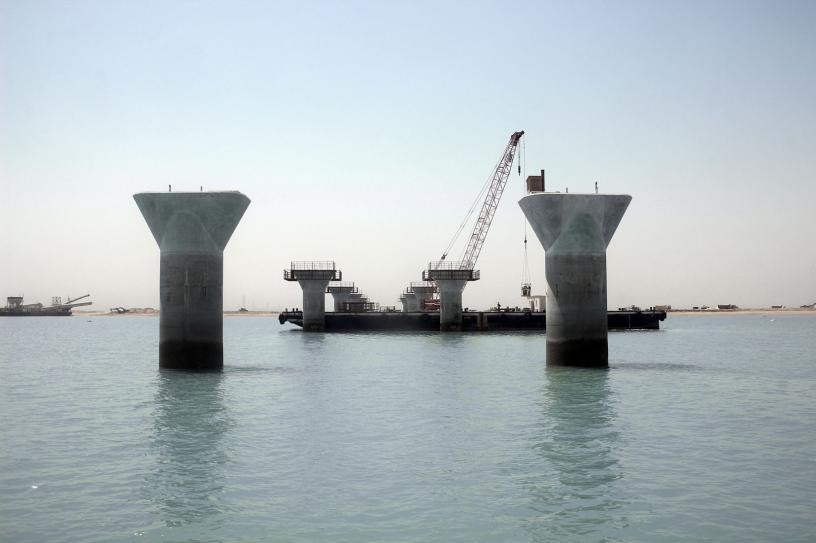 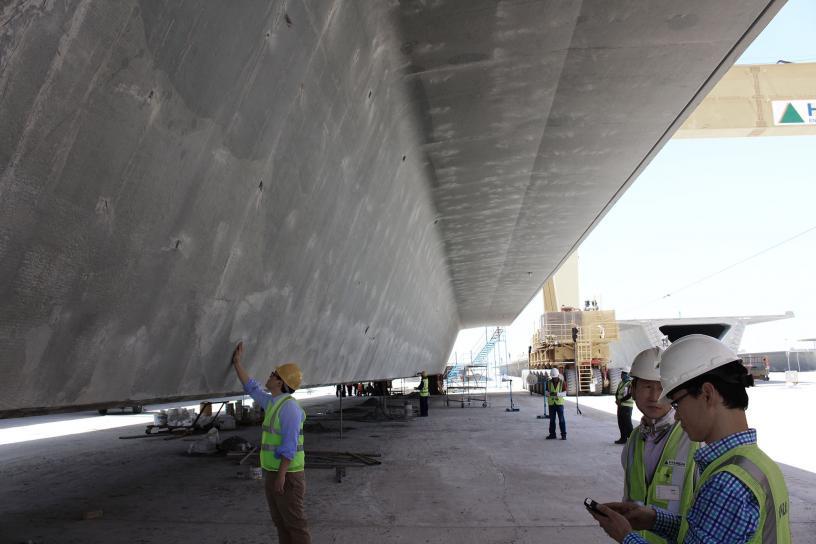 About Fibertex Nonwovens A/S
The Fibertex Group is a market-leading manufacturer of nonwovens for industrial and technical applications. With its corporate office in Aalborg, Denmark, and manufacturing sites in Denmark, the Czech Republic, France, South Africa, USA, Turkey and sales subsidiaries in France, Spain and Portugal, China and India, Fibertex is represented globally. Since its establishment in 1968, Fibertex has expanded continuously and today manufactures nonwovens for customers all over the world for many different applications.